Here is a Cat Thread

Here is a Cat Thread

Bruno is a tremendous, full blooded, fully pedigreed 4 year old male Maine Coon cat.  His littermate brother “Luigi” was featured in our Facebook videos introducing everyone to what a true Maine Coon cat really looks like.  A large, long body with a full bushy tail are the most striking features of this magnificent breed.  Bruno adds his own docile and regal personality to the equation. A very likable companion!

Bruno was presented to the hospital after a long weekend of infrequent vomiting, lack of appetite and inactivity.  His examination was fairly normal except for tenderness with manipulation of his abdomen and intestinal tract specifically.  In situations of digestive upsets, obtaining a good dietary history is very important.  Dietary questions found no diet changes, special treats and Bruno is not a trash can diver. I asked if he likes to chew on odd things like clothing, blankets, socks, or toys.  No again,……except he was found batting an empty sewing machine bobbin around the floor last week.

His diagnostic bloodwork and urinalysis looked excellent, but we needed to X-Ray his abdomen before we could write this off as just an upset stomach.  His plain X-Ray images were pretty much normal except for visibly thickened intestines.  To better focus on the thickened intestines we “encouraged Bruno to drink” (think stomach tube here) a liquid contrast material that would highlight the digestive tract on X-ray as the contrast liquid passed down the digestive tract over time.  After two hours, X-ray results showed not even a drop of contrast had left his stomach.  It should have passed out of the stomach and well down the digestive tract in two hours time.  It was now obvious that Bruno had something in his stomach that was obstructing the normal outflow.  He needed surgery to remove whatever was causing the problem.

The healthy intestine is soft, relaxed, uniformly shrimp pink and lays in the abdomen like a garden hose on a hot summer day. The blood vessels attach on one side throughout its length, coursing through a thin fan shaped veil of tissue called mesentery. The image below shows the appearance of Bruno’s intestinal tract shortly after we entered the abdomen.  Much of the intestinal tract was red and inflamed, the intestine is gathered or pleated against itself, called plicating, making these areas quite firm and at risk of compromised blood flow.  Close examination finds a tight black thread exposing itself at the mesenteric border of the plicated loops with a number of areas where the thread has cut through the intestinal wall and perforated the intestine. A clump of thread was felt lodged in the outflow area of the stomach.  The entire length of intestinal tract was affected to varying degrees because the thread was felt to be passing continuous from the stomach to the colon.  Finding a linear foreign body coursing from top to bottom was a first for me. 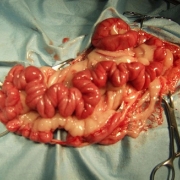 Fully understanding the problem with swallowing thread can be somewhat elusive; after all, it is all soft material.  The problem is created when some of the thread can move down the intestine and some cannot, the anchor at the top end often presents as a “bird’s nest”. Peristaltic contractions attempt to pull the loose string lower in the tract but since it is “fixed” at the top to the nest it becomes stretched taut. Further peristaltic contractions cause the intestine to gradually gather along the string in an oral direction, producing the classic plicated appearance. With increasing tension on the string it becomes embedded in the intestinal wall at the mesenteric border, resulting in marked inflammation, perforates the intestinal wall then developing peritonitis develops (abdominal cavity infection).

The first order of business was to evaluate the extent of damage by releasing the tension on the thread and relaxing the intestine throughout its length.  Each piece of thread that was peeking out of the intestine was held with a clamp and cut on the upstream end.  This would allow a length of intestine above that point to relax. With the same procedure done in sequence, starting at the bottom and working upstream a length of thread could be removed from each site.  This happened 6-7 times up the intestine and once over the outflow area of the stomach where the “birds nest” obstruction was finally removed.

Repair began after very careful assessment of the damage. This resulted in removal of about 18 – 24” of the highest section of the intestine (duodenum into jejunum). After that, every individual area of perforation or injury was cleaned of diseased tissue and sutured closed.

The last stage of the surgery was to address the infection in the abdomen. To do this, warm sterile fluids were flushed through the open abdomen 7 – 8 times to dilute the bacterial numbers to a level that the immune system, aided by aggressive antibiotic therapy, can eliminate the infection.  After that was completed the abdomen was closed.

With a list of medications and good supportive care Bruno gradually improved day by day. By the third post-surgical day he was allowed to go home.  He made continued improvement at home and is now back to his old self.

Take Home Messages:
1) Cats hide their disease very well. Bruno was really in a bad way when he was brought to the hospital.  He looked good: bright eyes and showing little sign of discomfort, but he was very uncomfortable and developing a life threatening set of problems.
2) Linear objects can be deadly if ingested. Every cat cartoon ever made shows cats playing with a ball of yarn.  BAD idea!
3) Keep all pets away from thread, string, dental floss, rubber bands, hair ties, fishing line, small cords, clothes with straps, hose and undergarments, etc…. I have surgically removed all of these at some point in my doctor-life from cats and dogs. 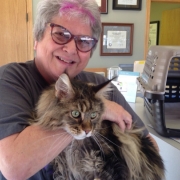